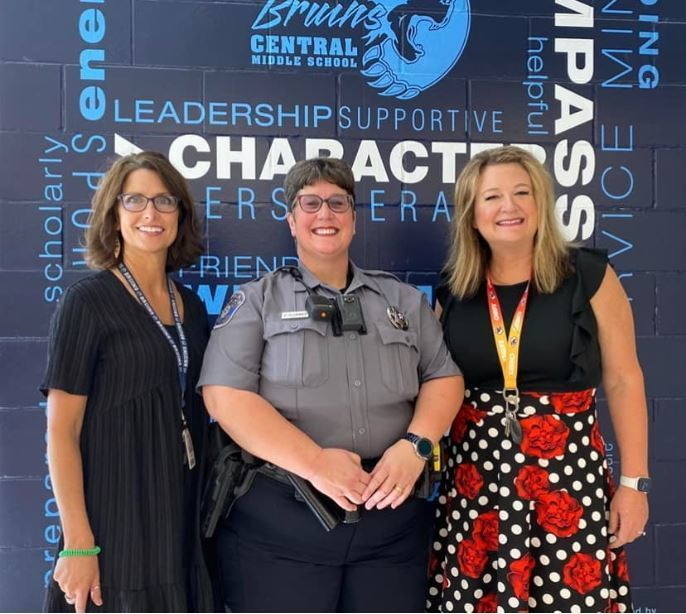 This is the first in a six part series to highlight Bartlesville Public Schools’ School Resource Officers and raise community awareness regarding safety in our schools.

Bartlesville Public Schools District (the “District”) continues to prioritize safety. To that end, the District is in the process of adding six school resource officers (“SROs”) over the next ten months to the three SROs already in place as of last year.  By increasing the number of SROs assigned to the District, each school campus will have its own SRO stationed at that campus for the full school day. The Bartlesville Public Schools Foundation sat down with the District’s longest employed SRO, Officer Korie Plummer, to learn more about her and the valuable role SROs play in our schools.

Most of Bartlesville would recognize Officer Plummer as the charismatic traffic guard at Bartlesville High School (“BHS”), and more recently Central Middle School (“Central”), effectively directing traffic during school dismissal while entertaining passersby with her gestures.  It was apparent to everyone around her that she loved what she did.   But BHS students, and now Central students, know her as much more than the traffic guard.  They know her as an SRO - and more than that, as a mentor, counselor, and friend.

Officer Plummer grew up in Springdale, Arkansas and attended high school and college in Springfield, Missouri.  With her grandmother residing in Bartlesville, Plummer was very familiar with our community long before moving here.

As a child, Officer Plummer wanted to be a veterinarian, then considered being a physical therapist; but she found her calling during her senior year of high school when she did a ride along with a local police officer as part of her high school’s shadowing program.  After that experience, she knew she wanted to become a police officer.  She went on to participate in her community’s police cadet program, learning the basics of police service.  Following high school, Plummer attended Drury University, where she earned her degree in Criminal Justice.

Shortly after graduating from college in 1997, Plummer was offered her first job as a patrol officer in Bartlesville, Oklahoma.  When Lieutenant Steve Johnson told her that her patrol car number would be 141, the same number as her police cadet badge number, she took it as a sign that she was destined to serve in Bartlesville.

In the early 2000’s, Plummer was offered a position as a D.A.R.E. officer, assigned to educate Bartlesville sixth graders on the importance of avoiding drugs and violence.  This was Plummer’s first experience serving as a police officer in our schools - and she loved it.  A few years later, due in part to a reduction in funding, Officer Plummer and the two SROs that were in the schools at that time were put back on patrol full time.

In December 2012, after about ten years without a consistent police presence in the schools, Chief Tom Holland offered Plummer the chance to return to the schools and serve as the District’s only SRO. A few weeks into her new role, there was a significant threat to the safety of students and staff at BHS.  Following that event, the Bartlesville Police Department assigned Chris Bullen to the District as a second SRO.  Officer Bullen was housed at the Mid-High (9th and 10th grades) and covered the eastside schools (Mid-High, Wilson, Hoover, Ranch Heights, and Madison).  Officer Plummer was housed at BHS and covered the westside schools (BHS, Central, Jane Phillips, Richard Kane, and Wayside).  Despite being assigned to specific schools, the officers supported each other when needed, and worked well with the District, the rest of the Bartlesville Police Department, and the Bartlesville Fire Department. When the Mid-High and BHS merged, Officer Plummer was assigned primarily to BHS and Officer Bullen was responsible for the middle and elementary schools.

Plummer covered BHS for nine years (December 2012 to August 2021).  With the addition of Corporal Brandon Meyer in August 2020 who would cover the elementary schools, and Officer Terry Woods in August 2021 who would cover BHS, Plummer was reassigned to cover the middle schools. Officer Bullen retired in 2020.  In August 2022, Sergeant Ben Hollander joined as the District’s fourth SRO and was assigned to Madison.  At that time, Plummer was reassigned to Central. The current SRO assignments are: Officer Woods at BHS, Officer Plummer at Central, Sergeant Hollander at Madison, and Corporal Meyer at the elementary schools.

School Resource Officers have more responsibilities than the public may realize.  Their roles are defined by the National Association of School Resource Officers.  SROs are expected to maintain safety, enforce the law, and keep the peace.  They are also tasked with mentoring, serving as an informal counselor, and leading education discussions on topics like internet safety, stranger danger, safe driving and due process.

Officer Plummer glowed as she talked about the mentoring and counseling components - they are clearly her favorite parts of the job.  Plummer treasures the opportunity to build strong, positive relationships with students.  Being assigned to Central all day, everyday, she has much more time to focus on these essential aspects of her job.  She keeps her office stocked with snacks and water, encouraging kids who need a moment to cool off or a safe place to regroup, to stop by and visit her.  She is proud to say that some of her closest, and most positive relationships are with the students who struggle to stay out of trouble.  She prioritizes getting those students to view her and other police officers as a trusted adult.

In addition to the immediate benefits of having an SRO at every school campus, Plummer anticipates a significant payoff years down the road. As elementary students come up through the secondary schools and have consistent, positive, and supportive interactions with police, they will naturally begin seeing police officers as resources instead of adversaries.

Central’s Principal, Keri Gardner, spoke to the value that Plummer’s consistent presence brings to her school, stating that Officer Plummer is developing strong relationships with all of Gardner’s students and staff and supporting a positive learning environment.

When Plummer is not in the schools, she continues her service with the Bartlesville Police Department as a patrol officer.  She also serves as a firearms instructor for the State of Oklahoma, educating officers across the state on the use of firearms.  When she is not working, Plummer enjoys spending time outdoors with her husband, their two children, and their two dogs, Leia and Samson.  She would love to get her German Shepard, Samson, certified as a therapy dog and bring him into the schools with her.  Because of the strong relationships she has developed with Bartlesville students, you will often see Plummer at extracurricular activities, cheering on those kids.

Officer Plummer recently celebrated twenty-five years with the Bartlesville Police Department and ten years as an SRO for Bartlesville Public Schools.  She has received several letters of commendation, a life saving award, and was named the 2000 Kiwanis Officer of the Year. Even with this impressive background, Plummer has no intention of slowing down. She has big ideas for programs she wants to bring to the District, including shadowing and mentoring opportunities for students.  She hopes that with more SROs in the District, the officers can play a significant role in these initiatives.

The Bartlesville Public Schools Foundation is raising funds to support and sustain the District’s valuable SRO positions.  To contribute to this fundraising effort, contact Blair Ellis, BPSF Executive Director at 918-336-8600, ext 3523 or ellisb@bps-ok.org, or by visiting bpsfoundation.org/donate